Ian was born in Wellington, his father coming from Otago and his mother one of the Wellington Plimmers – the great grand-daughter of John Plimmer of the statue.

His early schooling took place in Khandallah and Washington DC (where his father was in the NZ Embassy), and then at Nelson College. This was followed by student years at Victoria University where he graduated with a B Com (in Economics and politics) and sat on the Students’ Association Executive for two years, being Men’s Vice President in 1966. He is also a graduate of Auckland University, with post graduate Dip Ed, and in 2005 received that University’s ‘Distinguished Alumni’ Award. 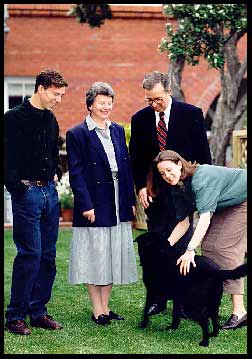 Ian and Jenny a few years ago with Scott and Libby, plus, rather sadly, the late Turvy

His primary career was in the independent school sector, teaching first at King’s College in Auckland where he was a Housemaster and then at Eton College in Britain, subsequently returning as Lower Master, ie Deputy Headmaster, in 1988. He was Headmaster of Wanganui Collegiate School from 1980 to 1988 and of Scots College from 1992 to 2002. Wellington was the only city which would have attracted him and his family back from overseas.

During his time in the school sector he was President of the Independent Heads Association and he served on various government committees on education. Since that time he has been Chair of the Correspondence School and also Chair of the Wellington College of Education, this being at the time it merged with Victoria University. He is currently Chair of NZ National Commission of UNESCO

Ian has had considerable experience in both senior management and governance.

Ian has been married to Jenny for 44 years and they have two adult children, both married and living in Wellington with their own children. Ian and Jenny live on The Terrace. He is a Justice of the Peace. He was awarded the QSO and the 1990 Commemoration Medal, both for services to NZ in the UK, and the CNZM in 2013 for services to education and the community. He was made a Freeman of the City of London in 1992 and in 2012 he received the Paul Harris (Rotary) Award.